One of the first ways that Americans felt the impact of the COVID-19 pandemic was the cancellation of the 2020 NCAA Men’s Basketball Tournament. But March Madness returned in 2021, with record-setting viewership in the First Four games. The tournament also broke records for ad sales, with 100 different companies booking spots before the first game. Major CPGs including Coca-Cola Co., Unilever and Hershey Co.’s Reese’s signed multi-year sponsorship deals to ensure placements in the most watched college matches, including the men’s championship between Baylor and Gonzaga that brought 16.9 million viewers to CBS. The network said it was the most watched non-football sports event since the pandemic began, beating out the 2020 World Series. 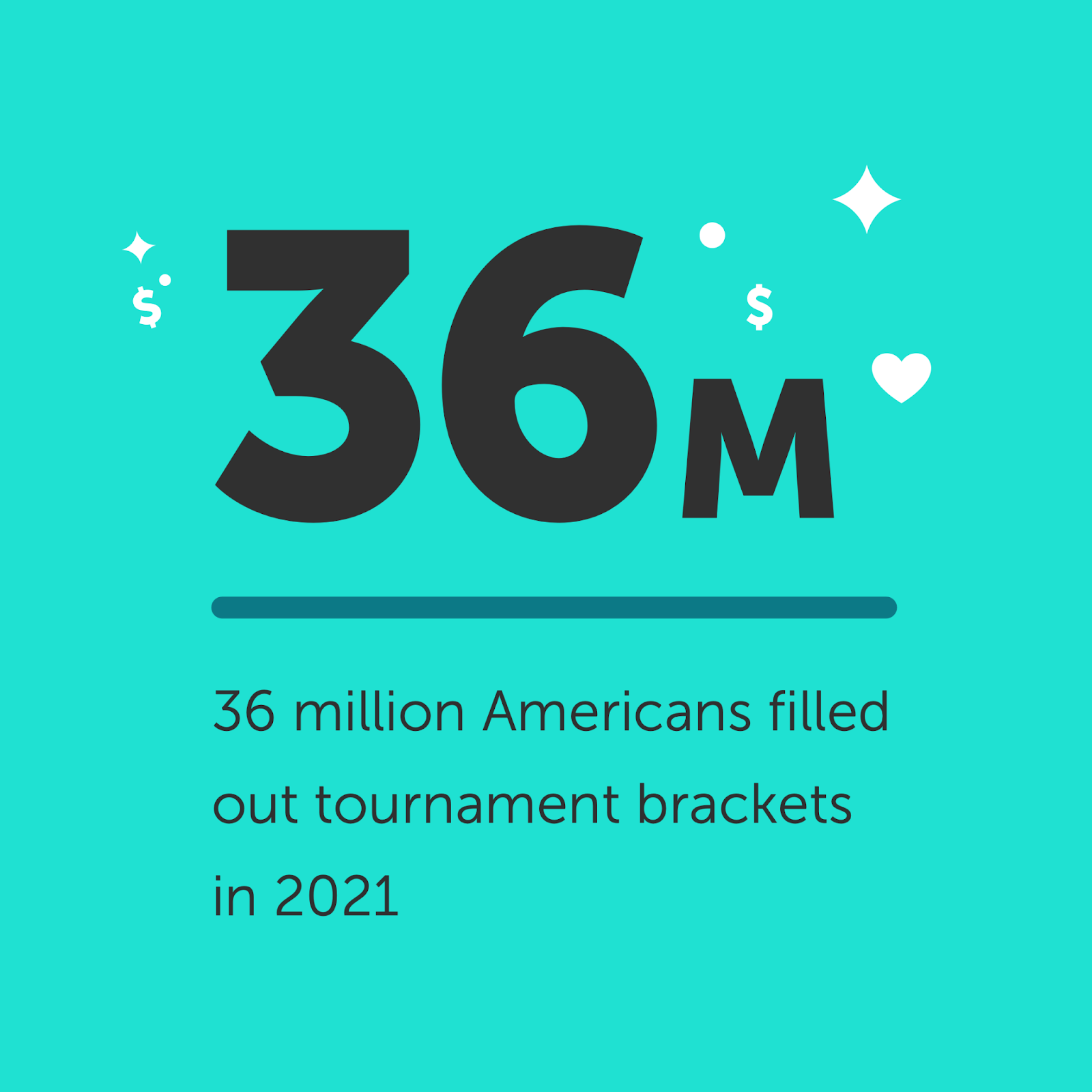 The appeal of March Madness extends beyond basketball fans and alumni of competitive schools. According to a study from the American Gaming Association reported by Axios, 36.7 million Americans filled out tournament brackets in 2021. Sports betting is legal in 25 states and Washington, D.C. and March Madness is the biggest betting event of the year, eclipsing the Super Bowl because there are so many games to wager on. Having bragging rights or money on the line builds engagement throughout the competition.

The NCAA is also looking to build its appeal with women by making the competition more equitable. The term March Madness has typically only been associated with the men’s tournament, but in 2022 it will be applied to the women’s competition for the first time. All of the games in the women’s tournament were nationally televised for the first time in 2021, and viewership for the Sweet Sixteen, Elite Eight, semifinals and title game were all higher than in 2019. Women are football’s most overlooked fans, and the NCAA and its sponsors are smart not to leave money on the table by neglecting them.

Beyond running ads during games, CPGs capitalized on the excitement surrounding March Madness 2021 with major shopper marketing programs. Mondelez International’s Nabisco activated its status as the official crackers and cookies of the NCAA by running a “Snack Bracket” sweepstakes from Jan. 22 through April 9 that awarded a trip for four to New Orleans to attend the 2022 Men’s Final Four. Consumers entered on nabiscosnackbraket.com, a promotional page that presented a daily matchup between two game time snacking recipes incorporating Nabisco products. A concurrent instant-win game awarded prizes including five coolers, 50 mini-basketball hoops and 12 projectors. Southfield, MI-based Merkle handled the promotion.

Fellow sponsor Coca-Cola ran a “Beat the Buzzer” instant-win game through a promotional page operated by Merkle. Consumers could only enter on NCAA game days between March 19 and April 6, though registration for the promotion began on March 1. The game awarded escalating cash prizes starting with 32 $100 winners during the first round of the tournament and culminating in a $2,500 prize during the National Championship. Consumers could also choose one of four sweepstakes prize pools with options including a $2,000 Amazon gift card and a $1,500 Uber Eats gift card. The company set up March Madness spectaculars and pallet displays at retailers including Meijer and Kroger, with some of the displays spotlighting local teams in the tournament. 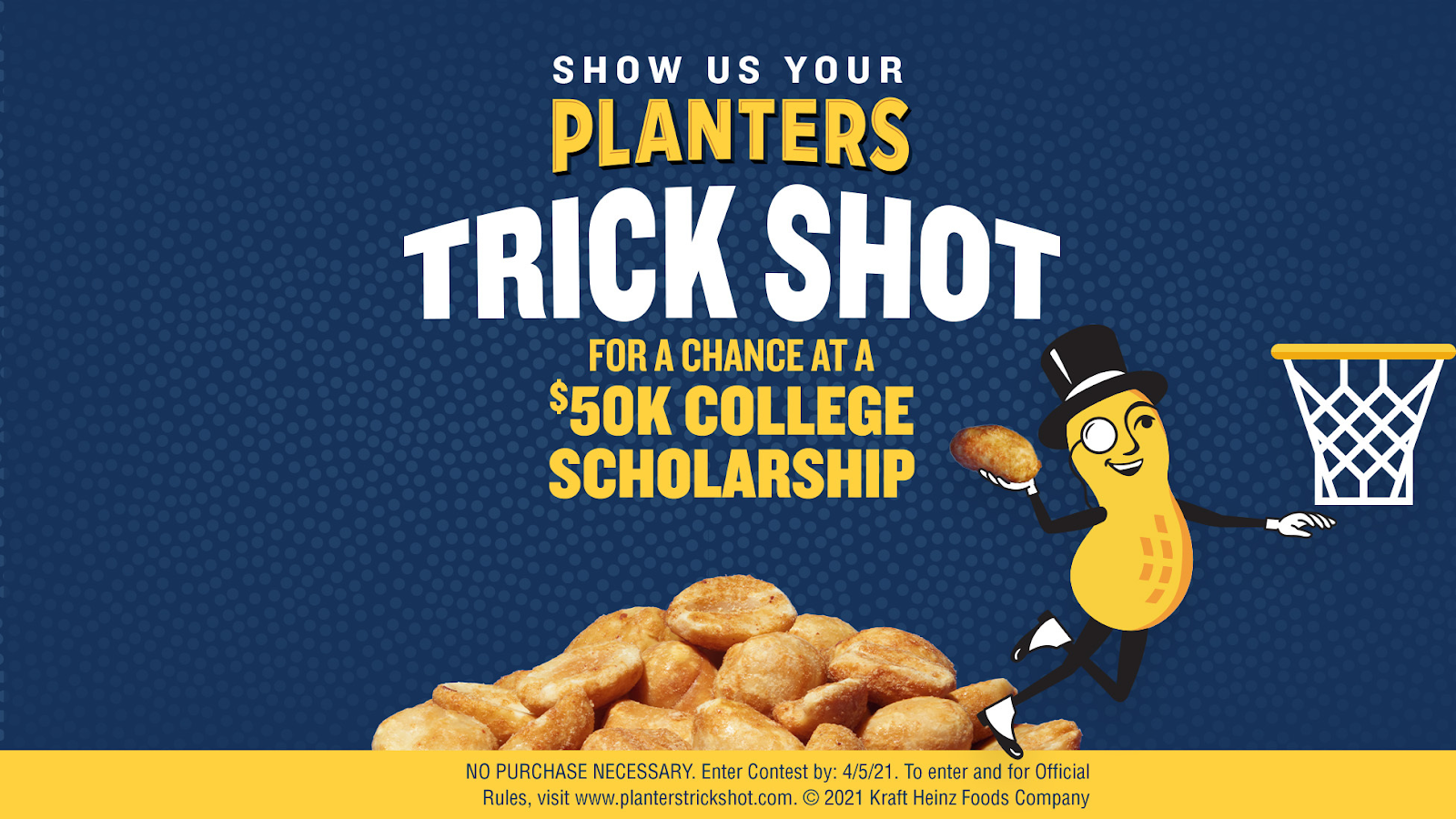 Kraft Heinz’s Planters ran a “Trick Shot” contest from Feb. 26 to April 5, which consumers entered by sharing a video on Twitter, Instagram and TikTok. A panel of judges chose two finalists to advance to a poll on Twitter and Instagram, with the top vote getter winning $50,000.

Ibotta helped brands including Mars Inc.’s Snickers, PepsiCo’s Mtn Dew and Perdue Farms’ flagship get into the game with its 2021 March Hoops promotion. The effort provided participants with a 36.51% sales lift and delivered approximately 11.5 million impressions through banners, push notifications and email.

Don’t get stuck on the sidelines this March Madness season. Inquire now to join Ibotta’s team and apply the full-court press to your competition by delivering cashback offers to shoppers looking for deals to supply their viewing parties throughout the 2022 tournament.

Enter your email address to stay updated on the latest industry trends, seasonal events, and more!